I arrived home today to find an exciting bit of post: three copies of the latest Adventist Today. It is apparently the GC Session Special. It’s twice as thick as usual, and has been sent to all the GC Session delegates, as well as the normal subscribers. The exciting part is that it contains an article written by me: That’s So Meta: The Post-Postmodern Church. The article is based on a speech I gave at Reframe at the One project is San Diego. One of the editors of Adventist Today was in the audience and asked if I could give him a transcript. The wonderful editors at Adventist Today helped make the article much better than the speech, and definitely worth reading. 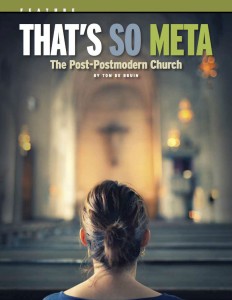 Since receiving the magazine, I have read the other articles which are excellent. Reinder Bruinsma, fellow Dutchman, discusses how we choose our leaders. Smuts Van Rooyen, fellow South African, treats the beauty of pluralism… well.. beautifully. Jon Paulien talks about ordination, Alden Thompson reflects on the coming session and beyond, Desmond Ford analyses the genre of Genesis 1-11, etc. You can download the whole magazine as a PDF here. If you like it, share that page so that many more can read it.

If you just want to see my article, Get it here (PDF). This is how it starts:

Sometimes it seems to me that everything in this world is defined by a “post-.” I was born in South Africa to a post-war Dutch immigrant, fleeing post-industrial Europe for a post-colonial future. In the post-apartheid economic drop, we moved, post hoc, back to postmodern Holland, where I still live. The change from a racist to a post-racial society was a shock to me. My inborn fascination with language led me to pursue postgraduate studies at Newbold College in post-structuralism. There I met my postfeminist wife. She studied post-apocalyptic fiction and is now pursuing a PhD in posthumanism. Currently, I work post-pastorally as an administrator in this postlapsarian world. More specifically, I reside in post-Christian Holland. The best part about this paragraph? I didn’t make up even a single one of those words.

These days we seem eager to explain what we come after, but not where we currently are. If you were to ask me where I currently am, I would tell you I live in the Netherlands. We have one of the fastest-growing European Adventist churches, though sadly, like many European churches, our growth happens mainly through immigration. What’s behind these changes in the European church? It has something to do with yet another “post-”—in this case, post-Christianity.

Before I bring Europe into the equation, let’s look for a moment at the USA. Nowadays more and more people in the United States are unchurched; in fact, about half of the people living there don’t go to church regularly. Yet, despite this fact, they remain Christian. Let me explain what I mean using some statistics from a recent study by the Barna Group:

“When asked to identify their faith beliefs, 62% of unchurched adults consider themselves Christians. Most of the churchless in America—contrary to what one might believe—do not disdain Christianity nor desire to belittle it or tear it down. Many of them remain culturally tied to Christianity and are significantly interested in it. More than one-third (34%), for example, would describe themselves as “deeply spiritual.” Four in ten (41%) “strongly agree” that their religious faith is very important

in their life today. More than half (51%) are actively seeking something better spiritually than they have experienced to date. One-third (33%) say they have an active relationship with God that influences their life and are most likely to describe that relationship as “important to me” (95%), “satisfying” (90%), and “growing deeper” (73%).”

What this information boils down to is that although half of the population in America does not attend church regularly and might not represent what Adventists would call “Christians,” Christianity still plays a very important role in their day-to-day lives.

Now let’s compare this data to the European picture, which is radically different.

In the Netherlands, a 1999 survey put the portion of the population that goes to a religious service once a month at one in four. Since then this number has dropped to 12-16%. Now not even one person in 10 goes to church once a week, which is less than a third of the percentage of weekly attendees in the United States (26%). In fact, in the Netherlands more than half of the people would never go to church at all if it weren’t for weddings and funerals. If you were to ask a Dutch person, “Does religion occupy an important place in your life?” two out of three would say “No.” If you were to go just a little bit north to Sweden, that number would be even higher (83%).

Among the Dutch, only one in four believes that there is a God.

3 thoughts on “That’s So Meta”