[This blog post is part of series on metamodernism and awesomeness. If you don’t know what metamodernism is, read this first, otherwise you may be left in the dark. I’m developing some thoughts here, and reactions are more than welcome.]

Pete is both of these things. And neither. Pete is metamodern.

Heaven has been part and parcel of Christianity since the beginning. I could spend a thousand words describing and dissecting heaven, deconstructing and reconstructing it. But I don’t need to, a couple of paragraphs is enough.

Heaven is awesome! Heaven is the ultimate utopia. Heaven is a perfect place, without pain or sadness. Heaven is where life can be lived like God intended, a wonderful life without hardships.

As I write this, the world is gearing up for the release of the final The Hunger Games movie. In Mockingjay, Part 2 we will finally see the climatic victory of protagonist Katniss and the rebels over President Snow and the ruling elite. I hate to have to do this [spoiler alert!], but don’t get your hopes up. 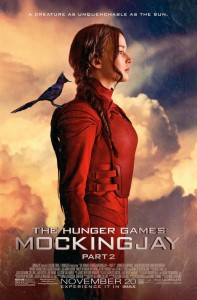 I don’t know where the movie will go, but the book’s plot is quite complicated and convoluted – expressly so. The rebels attack the Capitol of Panem. Eventually they beat the oppressors, but in the attack most of Katniss’s team die. She makes it to the presidential mansion, but upon arriving a hoverplane drops bombs on a group of children. Medics rush to help them. At that precise moment a hoverplane drops a second load, killing all – including Katniss’s sister. Katniss is knocked unconscious.

Upon awaking she finds that president Snow has been captured, but he claims that the hoverplane was not his. It was the rebels themselves that did this. For them, the end must justify the means. The true nature of the rebels, led by new president Coin, becomes more apparent when the children of the old elite are forced into another Hunger Games.

Katniss sees that Coin’s rule is equally bad as Snow’s. When she is meant to execute Snow, she kills Coin instead. Hoping against hope that this third rebellion will preserve the possibility of a fair government. She is tried, but exonerated. Ostensibly on grounds of insanity, the true reason is much more daunting. She reflects:

The truth is, no one quite knows what to do with me now that the war’s over, although if another one should spring up, Plutarch’s sure they could find a role for me. […]

”Are you preparing for another war, Plutarch?” I ask.

”Oh, not now. Now we’re in that sweet period where everyone agrees that our recent horrors should never be repeated,“ he says. ”But collective thinking is usually short-lived. We’re fickle, stupid beings with poor memories and a great gift for self-destruction. Although who knows? Maybe this will be it, Katniss.”

”The time it sticks. Maybe we are witnessing the evolution of the human race. Think about that.”

The rebels might have won, but they simply replaced one dystopia with the next. Coin was no better, and no worse, than Snow. Even when Katniss won again, destroying the short-lived Coin regime, the new promise of utopia is immediately rendered short-lived. But at the same time, there is the desire – hopeless as it may be – that this time there will be true, permanent utopia.

Whether or not the utopia lasts, Katniss experiences the founding of it. She lives in that utopia, but the dystopia from before lives on. Years later, seeing her children play she reflects:

The questions are just beginning. The arenas have been completely destroyed, the memorials built, there are no more Hunger Games. But they teach about them at school […] My children, who don’t know they play on a graveyard.

The world itself is scarred by the past, and the people living in it are similarly scarred:

But one day I’ll have to explain about my nightmares. Why they came. Why they won’t ever really go away. I’ll tell them how I survive it. I’ll tell them that on bad mornings, it feels impossible to take pleasure in anything because I’m afraid it could be taken away. That’s when I make a list in my head of every act of goodness I’ve seen someone do. It’s like a game. Repetitive. Even a little tedious after more than twenty years.

But there are much worse games to play.

There are worse games to play. Katniss living in the long-awaited utopia, is hopelessly scarred by the past. She lives in the utopia she dreamt of all her life, but that utopia does not really exist. It might be better than the past, but it really is not that great.

What is utopia for Katniss? Is it the new world order she helped create? I don’t think so. Her utopia is only when she remembers the goodness that people did for others. She does not focus on the ideological utopia of fair government and equalitarian society, she scans the world and sees little bits of utopia reflected in the acts of people.

In the Adventist Church, Global Youth Day and Impact events are thriving. The first is a Sabbath where the youth ‘live the sermon’. Not going to church to listen, but going to people to help. Impact events are large events where a big group of young people try to make a lasting impact on a city or community through acts of kindness and help.

This need to do some good, no matter how small, is a worldwide, fundamental phenomenon in the church. And I’d like to link it to metamodernism.

This generation was born into a world that has been ruined, and all it has is hope. Hope for a better future, hope for a utopia. But they are not idiots. They know that utopias don’t exist. Can’t exist. But, and this is the big thing, Utopias are useful.

As an impossible possibility, utopia should not be perceived as a new ideological blueprint, however. Much rather, it should be understood as a tool, say, a looking glass, for scanning this world and others for alternative possibilities. [Vermeulen & Van den Akker (PDF)]

Now, do you see where I’m going. The church has a Utopia: a never-ending theocratical kingdom of love and equality. A metamodernist can accept and love that utopia. It is the impossible possibility, the hope in something that will never be. But in the mean-time, they can use the kingdom as a mirror for the world.

We must look into the kingdom and scan the world, looking for possibilities. We must see that while the world is ruined, we can make a small local difference. We must understand that making a difference, locally, is all we need to do. All we want to do. We can make the church a force for good in the world, as a reflection of the kingdom for which we hope.

3 thoughts on “Utopia is Awesome”